The Jokes of Christmas Past

This time last year I was trudging along a slushy pavement with a soggy copy of The Times in my hand. It was only Christmas Eve, but I’d been given an early present – an interview I did with one of the paper’s journalists had just been published. These were heady times. A few month’s earlier I’d given a paper at Yale University and written a well received article for The Guardian. I was beginning to fancy myself as a bit of a media don. This was more than a touch premature – I  haven’t got close to a newspaper, radio show, or TV documentary since. However, at the time, a glittering showbiz career was beckoning (if only in my own mind) and I was undeniably excited.

The whole process started a few weeks earlier. I met with Mike Addelman, the University of Manchester’s brilliant press officer, to talk about publicizing some of my research. I ran through a few possibilities, but when I mentioned my work on American jokes his eyes lit up. “This stuff will really sell”, he said. The only thing missing was a topical hook. It was at this point that I said something that  I’ve lived to regret: “American humour has had a huge influence on the development of British comedy”, I explained. “Everything from stand-up routines, to sitcoms, to Christmas cracker jokes owes a debt of gratitude to the first generation of Yankee jesters.” The reference to Christmas crackers was just an off-the-cuff remark (I needed a third genre of humour to finish my list), but it was like dropping a tinsel-wrapped hand-grenade into the conversation. It was December. Christmas was upon us. Here was our hook.

There was just one problem: it wasn’t strictly true. The more I thought about it, the clearer it became to me that the labored puns in Christmas crackers have always been quintessentially British. Whilst some have undoubtedly drawn inspiration from the work of American humourists, this transatlantic influence is far less noticeable in cracker jokes than most other forms of British comedy. However, the wheels were now in motion and no amount of anxious hand wringing on my part seemed to slow things down. In retrospect, I should have just said: “Mike, I was wrong, we can’t run with the Christmas cracker angle.” Instead, we wrote a press release.

It’s still available online. As you can see from the headline, I really managed to downplay the festive angle: “Victorians went ‘crackers’ for American Jokes”. It’s cheesy, but I still rather like it. Other references to Christmas pop up regularly throughout the piece. Fortunately, I’d managed to find adverts describing American jokebooks as ideal Christmas presents. This put me on slightly more solid ground and, eventually, I was happy to send the press release out into the ether. However, before we gave it to the media, Mike contacted a friend at The Times and offered him exclusive rights to the story. To my surprise, they accepted and told me that they’d interview me over the phone later in the week.

I spent the next few days obsessively making sure that my mobile phone signal didn’t drop below two bars. When Russell Jenkins, the journalist from The Times, finally called me we spoke for about half an hour. It was an enjoyable interview. I spoke a bit too quickly, but managed to get most of my key points across in a clear fashion. I did my best to gloss over the cracker angle and play up the joke books. Later that day I sent a few more quotes over e-mail. Here’s what I wrote about Christmas:

These jests were particularly popular near Christmas – a time that was sometimes referred to by the Victorians as ‘joke-season’. Books of American humour were regularly advertised in the press as perfect Christmas presents. It isn’t hard to imagine some of these jests turning up in Christmas crackers.

Looking back, it was a weaselly piece of backtracking. STOP THE PRESSES: historian from Manchester discovers that it “isn’t hard to imagine” something interesting might have happened. Here’s the headline they actually went for…

When I first saw it my heart sank. It was everything I’d feared. Not only had they picked up the Christmas cracker angle, they’d decided to ramp things up to a whole new level. Rather than claim that America influenced the writing of British cracker jokes, I now seemed to be blaming the Yanks for the whole sorry genre. Two days later, they even hammered the point home in an editorial piece: 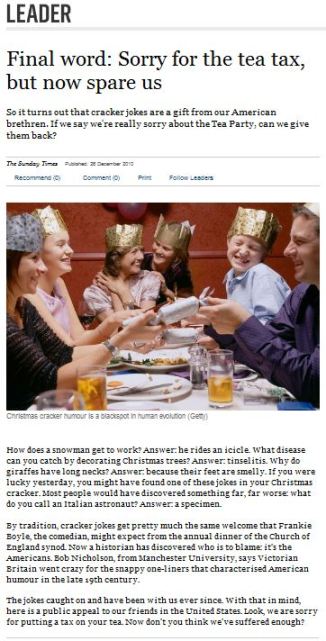 I don’t want to accuse a Murdoch paper of being economical with the truth – it’s Christmas, after all, and even Satan deserves a day off. Nor do I want to cast aspersions on Russell Jenkins – he’s a nice chap, a very good journalist, and he didn’t write anything that I didn’t feed to him. No, dear reader, the real villain of this story is me. In my rush to transform historical research into  news I allowed the story to slip out of my control. As a result, rather than feel pride at seeing my research in a major national newspaper, I felt like a dirty sellout; a media whore who dropped his academic integrity the moment fame came knocking. Merry Christmas to me.

Reading it again a year later I think it’s possible that I over reacted. It’s really not that bad. When you look beyond the headline, the rest of the article captures the spirit of my research fairly faithfully. Aside from a few cringe-worthy quotes (did I really say that “the Victorians enjoyed a laugh”?), there is little here to be embarrassed about. Nevertheless, the whole experience was a valuable crash course in dealing with the media. As academics, we exercise a great deal of control over the presentation of our ideas – our books, articles, conference papers, and even lectures are carefully scripted. However, the moment I started a conversation with a journalist, this control and security evaporated. Suddenly, I was thinking aloud – and doing it to a man with a notepad. It’s a dangerous situation. Who knows what idiotic, unsubstantiated, or career-ending statements I might have made if that phone call lasted another 20 minutes?

Enough self flagellation. It’s Christmas day, so let’s finish with an uplifting selection of festive Victorian jokes. Merry Christmas and thanks to all of you for supporting the blog in its first month. I’ll see you all in 2012…. if you survive these terrible gags.

Mrs. Henry Peck (whose mother has been visiting them for over four months): “I don’t know what to buy mother for a Christmas present. Do you?
Mr. Henry Peck: “Yes! Buy her a travelling bag!

“Thomas, spell weather,” said a schoolmaster to one of his pupils. “W-i-e-a-t-h-i-o-u-r, weather.” “Well, Thomas, you may sit down,” said the teacher. “I think this is the worst spell of weather we have had since last Christmas.”

“What do you think of the woman with a past?”
“At Christmas she is likely to be won by the man with a present.”

Bagley: “Susan, I intend to invite a few friends to our Christmas dinner. There is De Baggs, Ponsonby, Jupkins –eh?”
Mrs B. “Genial fellows, no doubt. Invite them, William, by all means, and I’ll tell you what I’ll do. I will give Norah a holiday and roast the turkey myself.”
Bagley: “Oh, well, if you’re determined to spoil our enjoyment, I’ll dine at a hotel.”

Jabbers: “Going to get married on the twenty-fifth? Well, you are a chump!”
Havers: “Why?”
“Because all your friends will make one gift do for both wedding and Christmas present.”
“Of course. But hereafter I can do the same with my anniversary and Christmas presents to my wife. See?”

Bill the Burglar (on Christmas Eve): “Sure, Mike; I’m Sandy Claws. Lay down an’ cover up yer heads an go to sleep, or I’ll not leave a thing. See?”

Rose: “I declare! I forgot to remove the prince mark from the Christmas present I sent to Mamie.”
Nellie: “Well, she would know the price, anyhow.”

Mr Taddles: “What was in that package which was stolen from you on your way home?”
Mrs Taddles: “If I must tell, it was a box of cigars I had bought for your Christmas gift. Are you sorry?”
Mr Taddles: “Yes, dear – very sorry – for the thief!”