In Mary Shelley’s version of the story, Victor Frankenstein locks himself in a laboratory for two years in order to pursue his scientific research. He is driven by an insatiable appetite for discovery, but when he finally witnesses the results of his labours he is filled with an overpowering sense of dread:

“I had desired it with an ardour that far exceeded moderation; but now that I had finished, the beauty of the dream vanished, and breathless horror and disgust filled my heart. Unable to endure the aspect of the being I had created, I rushed out of the room…”

I was reminded of this passage a few weeks ago on the morning of my PhD viva. It had been more than a month since I had last read my thesis, but in preparation for the big event I plucked up the courage to have a final look. It was a mistake. Every page seemed to bring a fresh disaster; a grammatical error here, a missing footnote there, and so many sentences that I longed to rewrite. Three and a half years earlier I had set out to create something beautiful. Now, as I looked upon it with fresh eyes, I saw only a monster; a hideous mess of typos, disjointed ideas, gaping holes, and embarrassing errors. I wanted to destroy it; to hide my shame from family, friends and colleagues. But it was too late. I had already branded the monster with my name and released it into the world. Soon, I thought, the villagers would come with their pitchforks and torches and drive me out of academia for good.

As it turns out, things went a bit better than I expected. My examiners were extremely positive about the thesis and only identified a few minor typographical errors that needed to be fixed. We had some stimulating conversations about how the project might be developed into a monograph and, before I knew it, it was all over.  I polished off the corrections in a few hours and, last Tuesday, I submitted the final bound version of the thesis. I’m done. I’d ask you to call me Dr. Bob, but it makes me sound like a talk show host with a degree in ‘Relationship Science’  from an online university.

When I collected the final, hardbound version of the thesis from the printers, I had a more positive Frankenstein moment. This time, I felt more like Colin Clive’s demented scientist from the 1931 film who greets the success of his experiment in a slightly different fashion:

Swap the noise of crashing thunder for the sound of a laser printer, and you’ve pretty much got the scenario that was playing out in my head. Unfortunately, no friends were on hand to hold me back as I proclaimed myself a god, so I thanked the man behind the desk and quietly shuffled out. 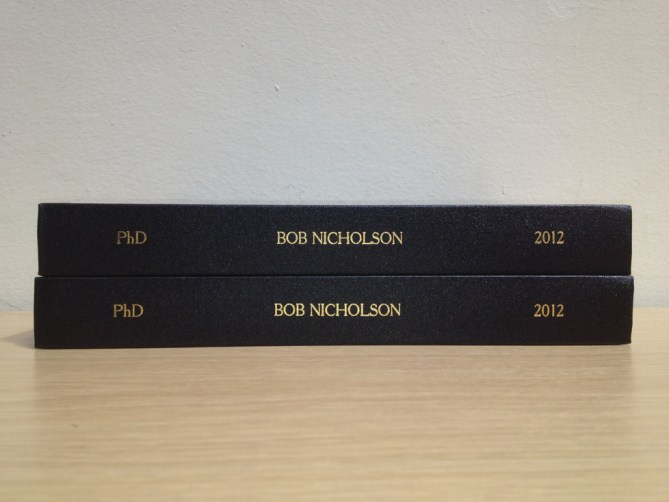 The euphoria of that moment – of seeing my creation materialise – lasted for a few giddy days, but has now passed. It was all a useful lesson in the importance of perspective. I had spent hours agonising over tiny, insignificant defects, whilst remaining blind to the bigger picture. Like a lot of writers, I had a distorted image of my own work and found it difficult to see the positives without somebody else pointing them out. I still feel anxious about releasing my creation into the world, but now as I look upon it with less anxious eyes I suspect that it’s more likely to be met with indifference than abject horror.

If you want to test this theory yourself, copies of the thesis should be in Manchester University library and on EThOS soon. If you’d like to read a digital version, send me a tweet/email and I’ll forward a pdf. For those of you who aren’t familiar with the project, here’s the abstract:

Or, if you’d prefer, here it is in image form: 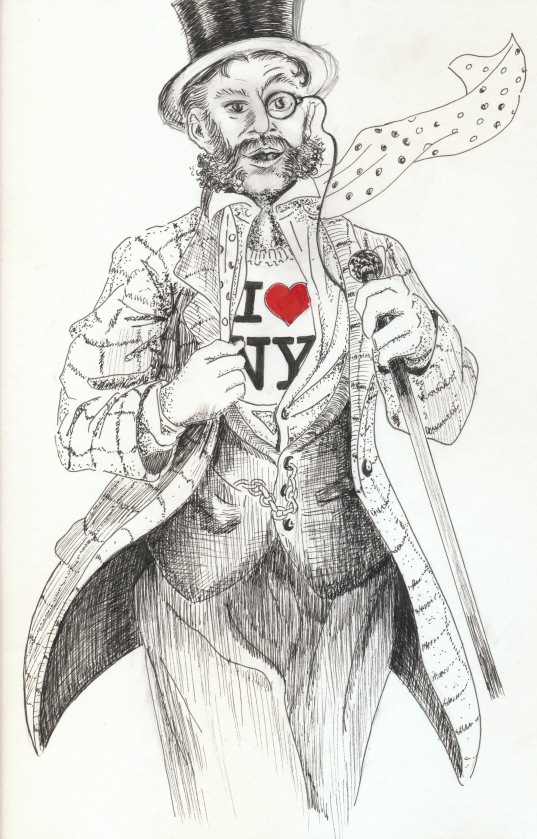