Sherlock Holmes and the Case of the Repeat Prescription

It’s been a record breaking year for British sport. Bradley Wiggins won the Tour de France, Andy Murray triumphed at the U.S. Open, our Olympians earned an impressive stack of gold medals, and ex-footballer Gary Linekar celebrated his 18th year as the face of Walkers crisps. It’s a remarkable achievement. Speaking to Digital Spy back in March, the former England striker confidently proclaimed that he was responsible for spearheading “quite comfortably the longest-running celebrity-endorsed campaign” in advertising history.

He’s not even close. An advert has recently been doing the rounds in which Sherlock Holmes endorses the miraculous healing powers of Beechams Pills. It’s not the great detective’s finest hour. Shorn of his deductive powers by a troublesome head cold, Holmes only regains his crime-solving abilities thanks to a timely dose of Beechams Ultra All In One. Conan Doyle must be spinning in his grave.

Holmes is rather vulnerable to this sort of treatment. The copyright on his adventures expired in 1980, leaving him open to all imaginable abuses and adaptations. However, it turns out that Beechams’ relationship with Sherlock pre-dates this landmark by quite some distance. Way back in 1893, the following advert began to appear in British papers: 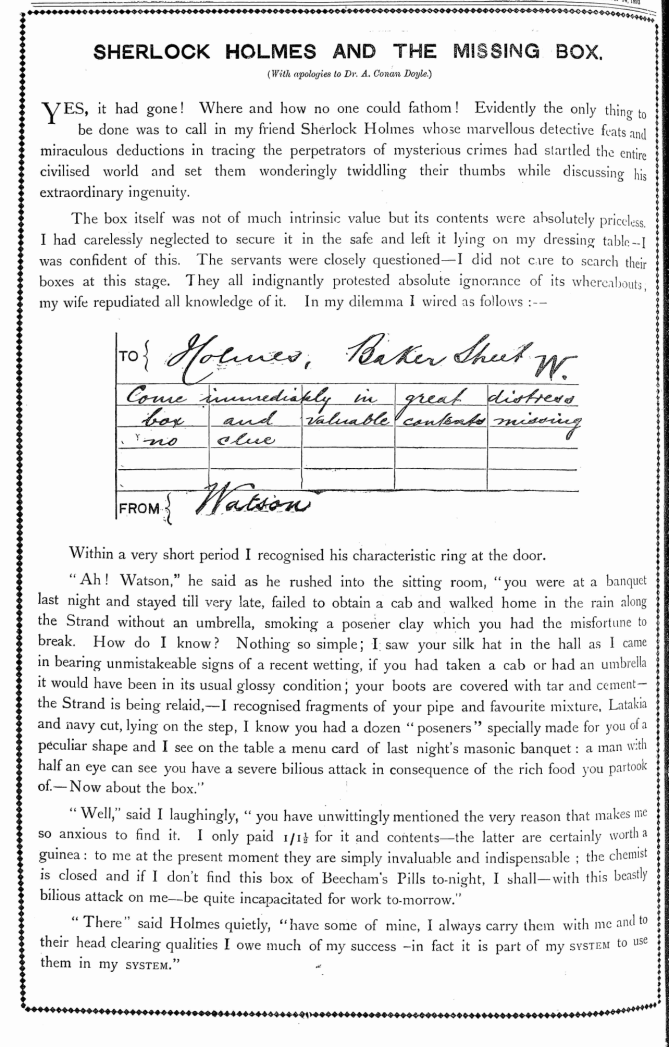 Watson loses a ‘priceless’ box of medication and telegraphs his friend for help. Holmes turns up and, after demonstrating his trademark skills of deduction, solves the problem by giving Watson some of his Beecham’s Pills. “I always carry them with me”, he testifies, “and to their head clearing qualities I owe much of my success – in fact it is part of my SYSTEM to use them in my SYSTEM.”

This wasn’t a one-off affair. A few months later, as readers struggled to come to terms with the detective’s apparent death at the Reichenbach Falls, Beecham’s published ‘The Last Letter from Sherlock Holmes.’ 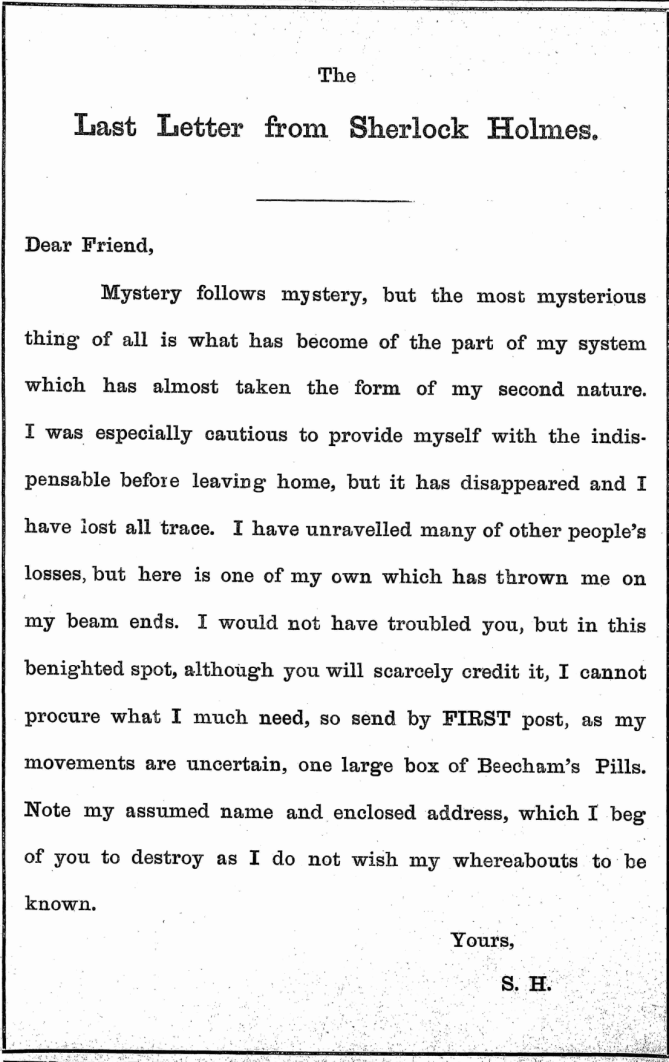 A desperate-seeming Holmes has lost his ‘indispensable’ supply of Beecham’s Pills and writes to Watson in the hope that he will forward a large box to him with great urgency. Apparently the pills didn’t arrive in time to save him from Moriarty. A few years later, the same advert was used with a slightly different title (‘A Letter from Sherlock Holmes’) in order to suggest that the detective was still alive and had chosen to break his cover in order to obtain some more pills.

In May 1894 Beecham’s called upon Holmes’ celebrity once again: 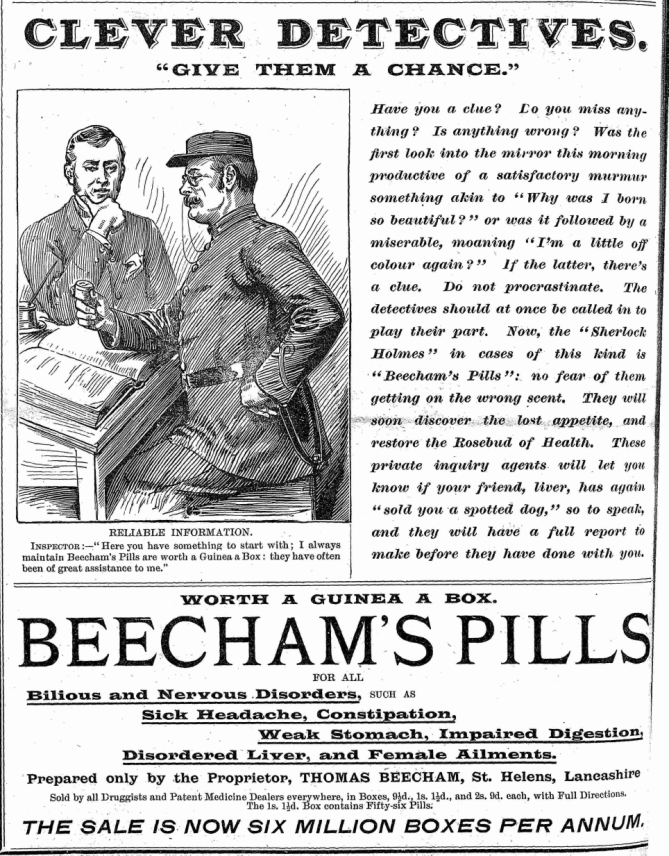 This time the pills themselves become detectives. “Have you a clue? Do you miss anything? Is anything wrong? … Do not procrastinate. The detectives should at once be called in to play their part. Now, the ‘Sherlock Holmes’ in cases of this kind is Beecham’s Pills: no fear of them getting on the wrong scent… These private inquiry agents will… have a full report to make before they have done with you.” I’m almost tempted to try some myself.

It’d be fascinating to know whether the people behind Beecham’s current campaign are aware of these earlier adverts, or whether the whole thing is just a remarkable coincidence. Either way, Holmes’ 120 year association with the brand (voluntary or not) looks like a tricky total to beat. Until Linekar’s reanimated corpse is used to flog Space Quavers to the unfortunate people of the 22nd century, I reckon the record belongs to the man in the Deerstalker.

——————–
Full credit to Ryan Easterbrook (@RyanEasterbrook), one of my old Swansea students, for spotting the new advert!