The Pleasures of Print

Something’s wrong with me. As a self-styled Digital Victorianist I’m supposed to prefer pixels over print. I get my news online, my books on an e-reader, and for the last five years I’ve been preaching the gospel of digital history to anybody who’ll listen. I rarely put pen to paper (as anybody who’s received a barely legible Christmas card from me this year will attest). In fact, I can’t remember the last time I spent a whole day without looking at a computer. I am, in short, a dyed-in-the-wool screen junkie.

Or at least that’s what I thought. Lately I’ve been flirting with the dark side. A few weeks ago the good people at Historic Newspapers sent me a handsomely packaged selection of old periodicals. The first paper to catch my eye was a reprint of the London edition of The National Police Gazette from 26 May 1897. It’s a delightfully salacious paper filled with saucy illustrations of Victorian girls showing off their ankles, strapping boxers flexing their biceps, and the occasional portrait of a racehorse. 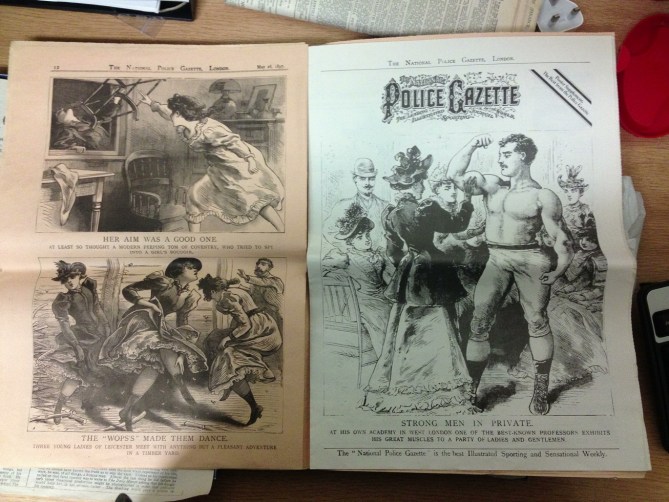 The most outrageous material appears in the adverts at the back of the paper. A notice for ‘Mrs Rose’s Famous Female Mixture’ offers to send female readers a discretely packaged bottle of medication designed to remove the most ‘OBSTINATE OBSTRUCTIONS’ in twelve hours. “Failure”, it claims, “is impossible”. Another advert promises to send readers photographs of ‘Footlight Favourites’ – glamorous young actresses “in Tights, Costume and Showing Bust”. Another promises an ‘Illustrated and Descriptive” catalog of ‘Rubber Specialities’. Most remarkably, a series of ‘booksellers’ advertise the sale of ‘spicy books & cards’ with such intriguing titles as ‘Revelations of Girlhood’, ‘Awful Disclosures in a Nunnery’, ’16 positions of matrimony’, ‘Confessions of a Gay Young Footman’ and, rather incongruously, the ‘Complete Works of Aristotle'(an infamous contraception manual). If these don’t do the trick, male readers suffering from ‘nervous exhaustion’ are encouraged to write to a Mr J. Murray in return for details of a ‘scientific cure’. It’s like walking into a Soho phone box. 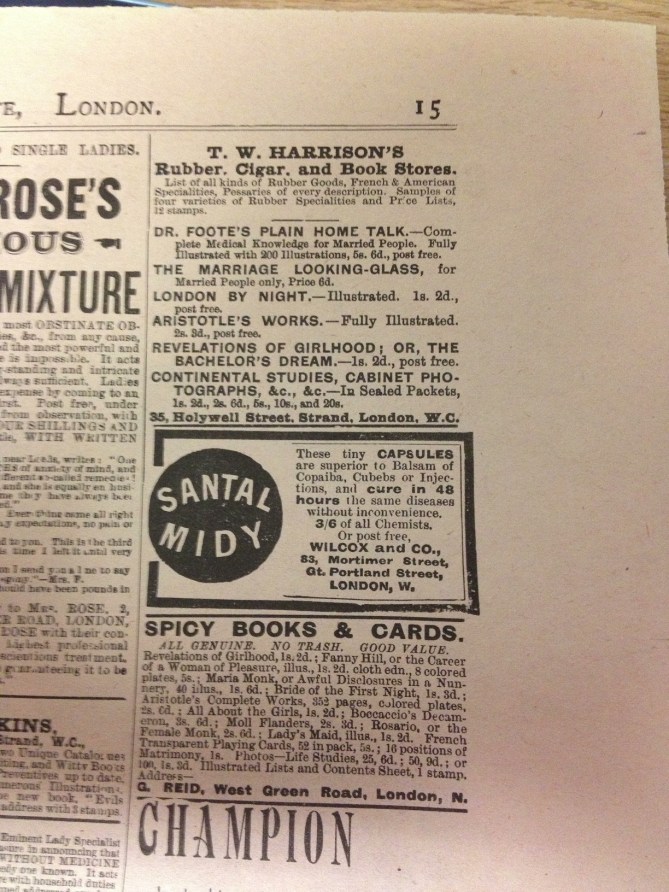 You’ll be surprised to learn that The National Police Gazette isn’t available online yet. Its particular brand of late-Victorian sport and low-brow sleaze hasn’t propelled it to the top of the British Library’s digitisation list, though personally I can’t think why. Even if it was accessible through digital archives, the experience of reading it online wouldn’t have been anything like as pleasurable as perusing it in print. It’s the kind of paper that begs to be creased, torn, and covered in dirt. It should be folded up, stuffed in a back pocket, and read at a bus stop. The collection of smutty adverts belongs on the back page of the paper – it’s a distinctive physical space that makes their thinly veiled innuendo seem all the more risque. If I’d arrived at them through a key-word search I’d have missed a vital part of their material identity; the screen just can’t capture their essential grubbiness.

There’s something powerful about seeing an old newspaper in the flesh. Next in my pack were two papers from the Edwardian period: a reprint of The Daily Mirror from April 1912 and an original copy of The Times from April 1911. They’re separated by less than a year but at first glance they seem centuries apart. The front page of the mirror is devoted to the memory of W. T. Stead (the pioneering journalist who died on the Titanic) and features several photographs along with a bold headline. It’s compact tabloid format makes it easy to pick up, manipulate, and carry around. The Times, on the other hand, is much weightier. The densely packed pages of print make it look heavy, but it’s only when you open it up and start to read it that the sheer size of the thing really hits you. 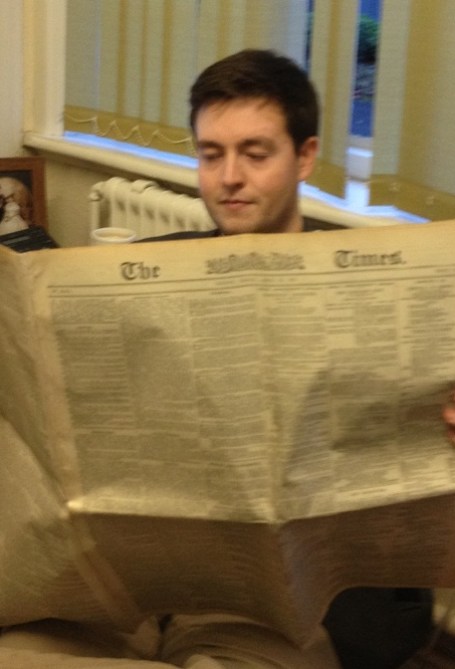 I was halfway through reading the first column before my arms started to ache. Maneuvering it into a more comfortable position is tricky – particularly for somebody more used to reading news on a smartphone than a broadsheet. It pins you down; chains you to your seat. Forget about carrying it around with you. If I tried to open it up during my commute home I’d take up half the train carriage. Whilst the Daily Mirror and the National Police Gazette would cheerfully fit in my jacket pocket, I’d have to carry The Times under my arm – a statement of old-fashioned Englishness that just begs to be accompanied by a black umbrella and a bowler hat. In material terms, it offers a completely different experience. 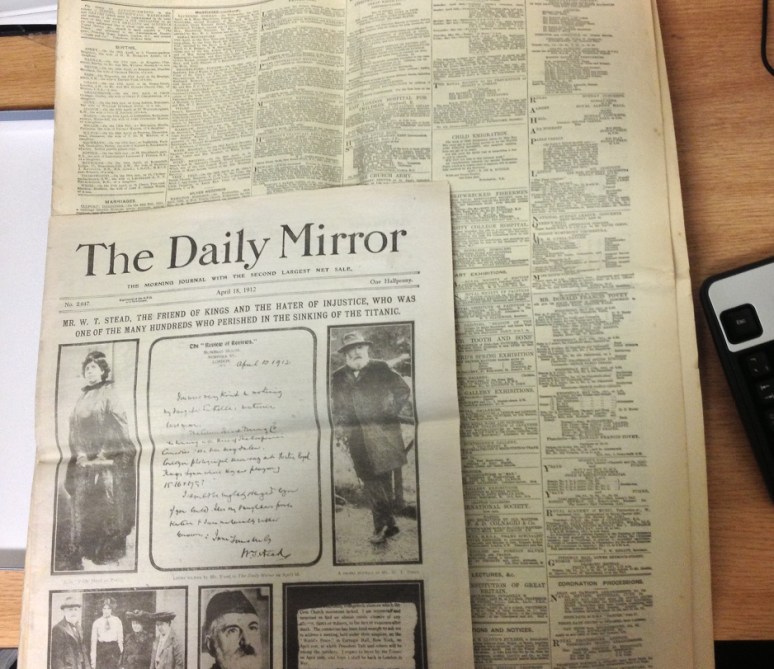 All of this stuff is pretty obvious – particularly to anybody who read broadsheet newspapers before the rise of the Berliner format – and yet there’s still something revelatory about picking up a Victorian newspaper and feeling its weight and texture in your hands. It’s a different experience to searching digital copies, spooling through microfilm, or even browsing leather-bound volumes. There’s something rather magical about it; a sense of communing more closely with the past.

Recognising the material life of our texts isn’t just pleasurable, it’s important. As Leah Price has recently reminded us, books and newspapers “mattered to the Victorians in ways that cannot be explained by their printed content alone. And whether displayed, defaced, exchanged, or discarded, printed matter participated, and still participates, in a range of transactions that stretches far beyond reading.”

I showed the papers to some of my students and they were equally enthralled. I only intended to give them a minute or two of browsing whilst I set up my PowerPoint presentation, but we ended up spending the best part of half an hour pouring over them. Digital archives, for all of their wondrous qualities, just don’t have the same magnetic effect.

This isn’t a Damascene conversion. I’m still an unreserved enthusiast when it comes to digital archives – they allow us to do so many things that we couldn’t do before, and the mysterious possibility of the empty search box brings its own sense of excitement. But, for now at least, I’m enjoying a brief flirtation with the pleasures of print.

—–
If you’d like to get your hands on your own copies of some old newspapers, I heartily recommend www.historic-newspapers.co.uk. They’ve got a great selection of content and the papers come beautifully packaged. If you need a last minute gift for the Victorianist in your life, you can’t go wrong with a copy of the National Police Gazette!