The Pleasures of Print 2: This Time It’s Personal

I’m hooked. Back in December I wrote a blog post about the pleasures of handling the original copies of old newspapers. This week, I managed to get my hands on a few more. I’ve been researching the history of The Times in advance of a guest appearance on Great British Railway Journeys – the popular BBC2 history series presented by Michael Portillo. It was all rather exciting (I even got my hair cut) until my contribution was squeezed out of the tight filming schedule. TV superstardom will have to wait. On the plus side, I ended up ordering a selection of old newspapers and periodicals to use in the shoot that have since consoled me in my time of disappointment.

Once again, the good people at Historic Newspapers (who I’m starting to think of as my ‘dealer’) ventured into their archive and dug out two copies of The Times from the middle of the nineteenth century. The first comes from 18 October 1845. I ordered it because it contains an editorial on ‘Railway Mania’ – a financial frenzy of the mid 1840s when thousands of Victorians invested their savings in railway companies, many of which were fraudulent or mismanaged. The Times condemned this craze for speculation and “[contemplated] with pity the enormous amount of individual misery which must inevitably… fall upon thousands who have madly entered within the clutches of the iron Mammon.” This concern rings a bit hollow when you turn the page and find that the rest of the paper (including a dedicated four page supplement) was packed with advertisements for railway shares. 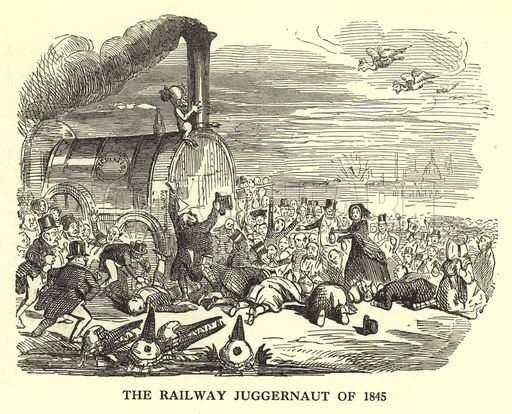 The content of the paper is fascinating, but I’d already made these discoveries using the Times Digital Archive. The printed version of the paper offers pleasures of a different kind. There’s something rather magical about holding a 168 year old newspaper in your hands. After all, such ephemeral texts were never really meant to survive beyond the day they were published. Other copies of the paper published that morning – the brothers and sisters of my text – were, according to Leah Price, probably used as cheese wrappers and toilet paper before eventually crumbling to dust. My copy, on the other hand, has aged remarkably well. Aside from a rather musty smell, the paper is still in very good condition and can be read as easily as on the day it was born.

It’s hard to say why this particular copy of the paper led such a charmed life. Whenever I come into the possession of an old book or newspaper, my instinctive reaction is to start day-dreaming about the life it led before we found each other. Whose hands have turned its pages? What places has it seen? What kind of adventures has it been on? Normally, this is little more than an idle fancy – tracking the history of such unremarkable objects is usually an impossible task. However, this copy of The Times provided me with a tantalizing clue. On the top right corner of the front page was a name: 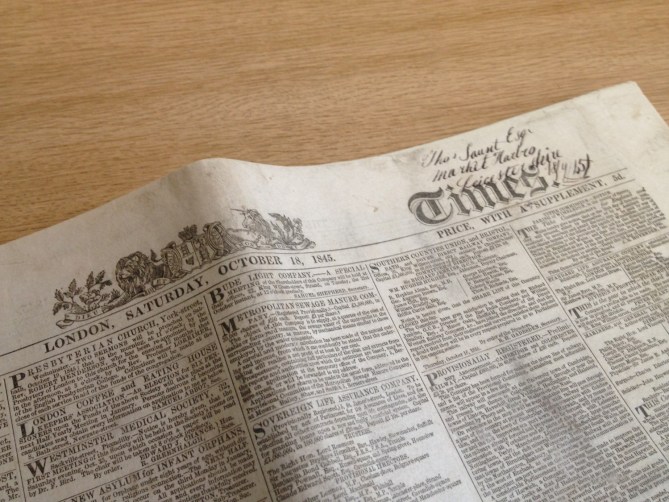 I immediately logged into ancestry.co.uk and entered these details into the 1841 census. Within a matter of seconds I had him! 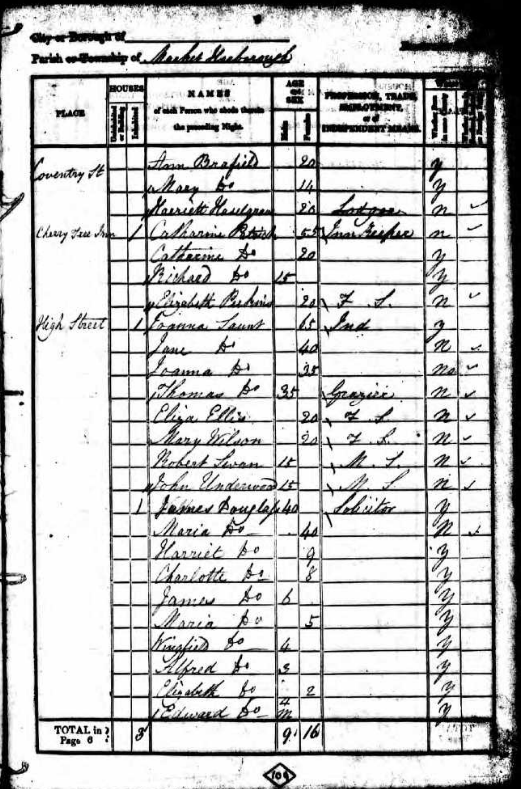 Thomas Saunt, aged around 35, was recorded as living in the first house on the High Street with his mother Joanna, his two sisters (Jane and another Joanna), and four servants. His profession is listed as a grazier – a name given to gentlemen farmers who reared large numbers of cattle or sheep. Whilst Thomas was the only adult male in the family, his mother was listed as the head of the household. This initially struck me as unusual (EDIT: though I’ve since been reliably informed that it isn’t!). I wondered if his father was somewhere else on the night of the census. I called my Dad (who’s far more practiced at this kind of research than me) and together we began to piece together a picture of the family. Thanks to the Mormon Church’s morally dubious (but incredibly productive) attempts to retrospectively baptize people into their faith, the databases on familysearch.org soon revealed that Thomas’ father, Lewis Saunt, died just before the census took place. Another quick search on the National Archives website uncovered his will – an extraordinarily detailed, 8-page document in which Lewis meticulously portioned out his extensive wealth and property between his wife and children. Thomas received thousands of pounds along with control of his father’s grazing business. 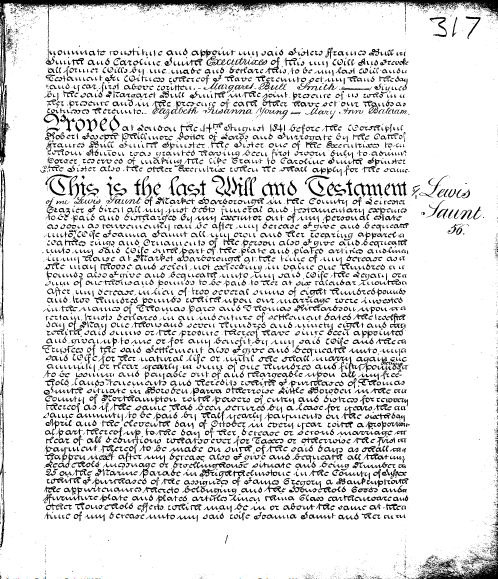 I spent the rest of the morning looking for traces of Thomas. I found him again in the 1851 and 1861 censuses. However, he had now begun to go by his more distinguished sounding full name: Thomas Barfoot Saunt. The word ‘grazier’ was also crossed out in the 1851 census and replaced by the more aspirational title of ‘Landed Proprietor’, along with a note saying that he employed five labourers. His sisters Jane and Joanna are recorded as living with him in both censuses, though Joanna appears to have married a clergyman named Frederick Roberts. Neither Jane, nor Thomas himself, ever appear to have married. 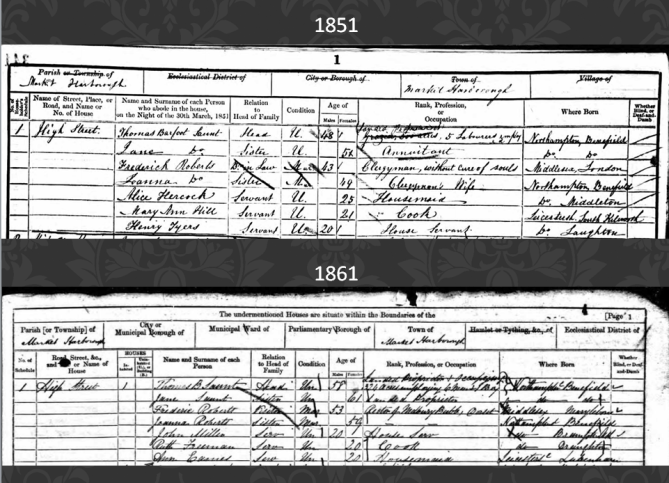 Finally, I turned my attention to the digital newspaper archives. Sadly he never appeared in The Times itself, but I found a few brief references to the family in local papers. In 1857, Thomas attended court in order to prosecute a railway labourer for stealing two of his lambs. In 1878, a notice informed his creditors that Thomas had passed away. Two years later, the Northampton Mercury reported that an annual donation of £11 18s had been left to the town’s aged and infirm by Joanna Saunt in her brother’s name. A quiet life. 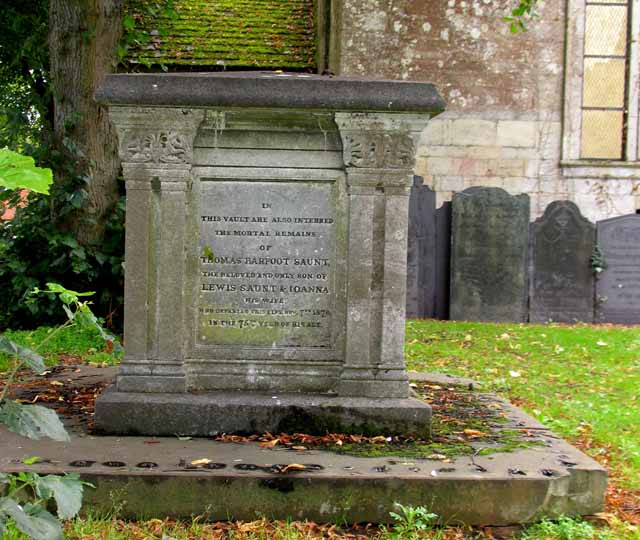 There’s something rather magical about all this. I’ve been doing this kind of archival research for the best part of a decade now, but the act of tracking down sources and gradually piecing together a story is still as thrilling as ever. The case of Thomas is a testament to the power of digital research; there’s no way I could have connected all of these pieces of information (never mind doing it over a cup of coffee in my office) without the use of multiple online archives. But it’s also a reminder about the value of printed materials and the unique fragments of marginalia they sometimes contain. Thousands of copies of The Times were printed on the 18 October 1845, but this is Thomas’ copy. It’s a uniquely personal piece of print. I can’t be sure that the paper ever reached Thomas’ hands – it’s possible, after all, that it was never delivered. Still, the romantic in me likes to think that it really did make it to Market Harborough and onto the breakfast table of the first house on the High Street. Flushed with the recently inherited wealth of his late father’s estate, I wonder whether Thomas Saunt Esq. was tempted by a spot of railway mania.

As Paul Fyfe reminded me in the comments below this article, individual newspapers aren’t necessarily as ephemeral as we might think. Whilst many were converted into fly paper and loo role, others were bound together in formats designed to be preserved and re-read. At first glace, Thomas Saunt’s copy of The Times doesn’t seem fit comfortably into either of these categories. It’s far too well preserved to have been used as scrap paper, but nor has it been converted into the more durable format of a bound volume. Or at least that’s what I thought. Curious about the provenance of the paper, I got in touch with the archivist in charge of Historic Newspapers‘ holdings. Here’s what he had to say:

The newspaper was part of a large run of bound volumes of the Times we received from a library in Leicester- I think  this was the reference library in Bishop’s Street which I think is now called Leicester Central Library following the closure of the Central Lending Library in Belvoir Street a couple of years ago and its merger with the reference library in Bishop’s Street . Not 100% sure of building details, but it is possible they either  wanted to offload their collection of Times bound volumes to create space due to the forthcoming merger or no longer wanted the Times bound volumes since they would have them on microfiche or something anyway- many newspapers have similarly disposed of their bound volumes which is where we have received a lot of our archive newspapers from.

The newspapers were clearly read and then folded & stored for a long while before going into bound volumes because there is age related staining on the folds of a number of the papers. Thus at some point the collection must have been donated and obtained by a library service in Leicester, which would have bound the newspapers for reference purposes.

So, it looks like Thomas’ copy of The Times was put into storage for many years before it was eventually bound together by a library in Leicester. These bound volumes have since been sold off and carefully dismantled, returning the papers to their original format. It’s a useful reminder that processes of remediation can sometimes flow in two directions; that texts and objects can, in some cases, be returned to their previous state. Of course, it’s worth noting that the destructive nature of remediation often makes this impossible. We’ll never be able to transform this digitised copy of Tit-Bits  back into its original format – too much material, such as the magazine’s distinctive green cover,  has been lost in its journey from single issue, to bound volume, archival microfilm, and eventually to its current digital state. Thomas’ issue of The Times is an unusual (if not unique) exception to the rule.

This tantalizing piece of new information about the life of Thomas’ Times raises more questions than it answers. Who folded up the paper and put it into storage? Did Thomas keep his copies of The Times in a personal archive? Did he donate them (perhaps to a library or perhaps a local reading room)? Was the paper ever actually delivered to him, or could it have been passed on to somebody else (or even archived) by his newsagent? I fear I’ll never know. I’m keen to find out whether other copies of The Times sourced from Leicester library bear his name in their upper-right corner, but I fear they’ve been separated and sold off. His name is sadly missing from an 1865 copy of the paper that I bought from the same place, which rather puts a dent in the image I was building up of Thomas as a man who never married but kept a lifetime’s worth of newspapers in neatly folded stacks. if anybody can shed any further light on these mysteries, I’d love to hear from you.