As an academic and bleeding-heart liberal I’ve long considered it my duty to read The Guardian. It’s hard going sometimes, but most days I manage to grit my teeth and get through it. Lately, however, my commitment has started to waver. In my weaker moments I find myself logging onto the Daily Mail website and gawping wondrously at its bi-polar diet of moral outrage and showbiz gossip. It seems that an eight year old American girl has been murdered by a sex offender that her family befriended in a Walmart, but on the plus side Abbey Crouch is showing off her beach body and Tulisa looks super slim in a tight print dress as she parties for the first time since her drugs arrest. It’s a relief just to know that she’s OK.

Of course, I’d never admit to reading any of this stuff. I leave The Guardian website open on my office computer in order to impress passers-by, but browse the Daily Mail  in incognito mode and only when the house is empty. After all, calling somebody a ‘Daily Mail Reader’ is just about the worst form of abuse imaginable in the lefty intellectual circles I frequent. If my occasional acts of journalistic slumming were discovered it would soon come out that I also like the X-factor and Strictly Come Dancing. Before long, my carefully constructed public persona would tumble like a house of cards. So, it’s a good job that nobody’ll ever know.

This contempt for mass culture probably goes some way towards explaining why the Daily Mail has taken a long time to be digitised. We’ve had The Times Digital Archive for more than a decade. The Guardian and Observer Archive has been around for a few years too. The British Newspaper Archive holds lengthy runs of multiple provincial papers, many of which stretch deep into the twentieth century. All of which makes it surprising that many of the period’s most popular newspapers have yet to be attended to. The Sun and the dear-departed News of the World are nowhere to be seen. The Daily Mirror and the Daily Express are notionally available through ukpressonline – an archive designed so clumsily that it’s almost quicker to walk to Colindale and find the papers by hand. Historians of twentieth-century Britain have long been in need of a paper to counterbalance the staid voice of The Times, but few have been forthcoming.

All of which makes Gale’s decision to digitise the Daily Mail most welcome. I’ve been looking forward to the archive for months and today I finally got my hands on the trial – it’s completely open until the 20th of July, so take a look while you still can! If you’re still here (why are you still here?) I’ve recorded my first impressions below. For the most part, Gale have presented us with the classic model of a single-newspaper archive. It covers the period from the paper’s inception in 1896 right up to 2004 – an impressive span that opens up some exciting new possibilities for tracking developments across the whole of the twentieth century. As usual, only one edition from each day has been digitised. The question of what to do with extra, late, regional, and sometimes even braille editions of newspapers is a problem faced by all digitisation projects, and commercial publishers like Gale have invariably weighed up the cost and opted against including them. In the case of the Daily Mail archive, most of the content has been sourced from in-house microfilms owned by Associated Newspapers who chose to preserve the final London edition of the paper. There appear to be no gaps in the archive for the main paper, but some supplements and magazines are missing. Similarly, the Mail on Sunday is considered to be a separate paper and has not been included in the database. I understand why these loose ends haven’t been tied up, but given that the archive focused on one publication (compared to the hundreds available through other archives) it’s a shame that the holdings aren’t as comprehensive as they might have been.

Having said all that, Gale’s archive does contain one remarkable collection of bonus materials – The Daily Mail Atlantic Edition. This version of the paper was edited, printed and sold on board large transatlantic passenger liners like the Berengaria, Aquitania, and the Mauretania during the 1920s and early 30s. The only known versions of the paper were found decaying in the Associated Newspapers archive and have been rescued by Gale and included in the archive. As a historian of transatlantic culture I’m extremely grateful for their timely intervention – I can’t wait to get properly stuck into this section of the archive. 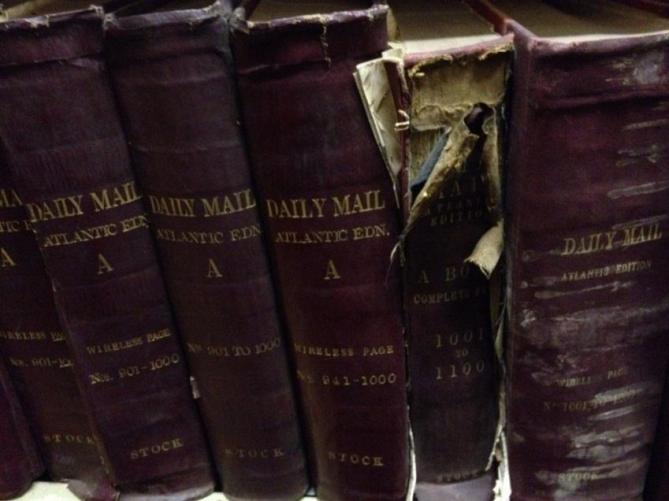 The quality of the scans is good, though varies across the archive. Between 1896 and 1962 the paper has been scanned in bitonal format (basic black and white). This makes it easier to read text, but renders photographs in a rather crude way. After 1962, as higher quality photographs began to appear, the paper has been scanned in greyscale. This results in higher quality photos, but more background noise behind the text. It’s difficult to strike a correct balance with things like this – the Illustrated London News archive prioritised image quality and ended up with some severe readability problems. From what I’ve seen so far, the solution pursued in the Daily Mail archive seems to have worked fairly well, though I’m sure I’ll soon encounter a pre-1962 image that I’d like to see in higher quality.

I’ve always been a fan of Gale’s interfaces. In the past they combined powerful search tools with a straightforward interface that made it quick and easy to find and save articles. however, in recent years they introduced NewsVault – a useful tool that allows users to cross-search multiple archives, but which introduced a cumbersome flash-based browser that was too narrow, loaded slowly and made it tricky to download material from the archive. This was the default interface for Gale’s last single-newspaper project, the Illustrated London News Archive, so I was expecting more of the same. However, to my delight, the interface for the Daily Mail archive owes more to the old  model than the new. The viewing window expands to the width of my widescreen monitor (great for full-page views). Individual articles load quickly and can be right-clicked, copied and saved with ease. You can also rotate an article in 90 degree stages. It’s all refreshingly simple. However, if you enjoyed the advanced features of NewsVault’s viewing window then you simple click the ‘Full Screen’ button and the article reloads in the flash browser. It’s the perfect solution – a simple and speedy interface up front with more power under the hood when required.

There are two features I’d particularly like to see added to this interface: The results page largely mirrors that of NewsVault and is also pretty good. It allows you to sort, refine, and search within results in ways that will be familiar to those who have used previous Gale products. Hovering over the image of each article loads a preview of the section that contains your keyword. This seems to load much faster than on previous versions of the system and is therefore much more useful as a time-saving tool. Still, I prefer the preview system used by the British Newspaper Archive, which provides more data and is immediately visible on the results page. The quality of Gale’s search features have long been one of the company’s trump cards. The Advanced Search page for the Daily Mail archive is every bit as sophisticated and flexible as in its predecessors. It’s possible to stack multiple rows of search terms. Advanced features like fuzzy searches, wild cards, and proximity searches are all available. Even better, the search box is set to ‘entire document’ by default – finally ending years of confusion for inexperienced users who performed ‘keyword’ searches without realising that it only examined an article’s title and author. As a digital humanities enthusiast I’d love to see some quantitative search tools like the ones included with NCCO – perhaps this will come when NewsVault is eventually integrated into Gale’s new Artemis platform.

All in all, I’m very impressed with the Daily Mail Historical Archive. It gives us access to a vitally important paper for the study of twentieth-century British history and should prove to be a valuable tool for both researching and teaching the period. Whilst many editions of the paper are missing, the inclusion of the Atlantic Editions should prompt some interesting new areas of research. The archive’s interface combines the best qualities of NewsVault and its predecessors, and the search tools are the best in the business. The website also hosts a series of illuminating articles on the history of the Daily Mail written by two of the paper’s current journalists and the acclaimed press historian Adrian Bingham. There’s also a fascinating piece by Seth Cayley on the Atlantic Edition and the process behind creating the digital archive. It’s clear that the archive has been put together with real care. In sum, this is very welcome addition to the ever-expanding list of digital newspaper archives. All that remains is to persuade my library to pay for it!