Have you heard about ARTEMIS? Don’t worry, it’s not another one of the NSA’s high-tech spying programs – unless they’re looking for terrorists by scrutinizing our ancestors’ private communications, which, in the light of recent revelations, isn’t actually that implausible. I first became aware of the project a few months ago when I was invited by email to pass judgement on some prospective logos. I picked the other one, which just goes to show how much I know about corporate branding. At the time I wasn’t really sure what Artemis was, save for the fact that it was named after the Greek goddess of hunting, wild animals and virginity. I’ve been wondering which of her three characteristics the new project would resemble and, rather disappointingly, it turns out to be the first.

“Artemis is a path-breaking research experience that unites Gale’s globally acclaimed digital archives and reference collections. By building a seamless research environment for multiple collections, Gale is creating the largest digital humanities and social sciences collection in the world. Starting with Eighteenth Century Collections Online (ECCO) and Nineteenth Century Collections Online (NCCO), Gale will be incorporating the majority of our primary source collections into Artemis Primary Sources, enabling researchers, teachers and students to cross-search these collections and discover and analyze content in entirely new ways.”

All of which sounds rather promising. The growth of digital archives has been an extraordinarily positive thing for researchers, but it’s getting increasingly difficult to keep track of them all. The Connected Histories project has done a great job of organizing some of these archives (particularly those that are open access), and Gale’s own NewsVault has gone some way towards organizing the company’s newspaper archives into a single (if slightly clunky) interface. This is a positive start, but there’s still plenty to be done. The potential of Artemis lies in its ability to connect seemingly disparate archives and uncover new connections between materials. It’s possible, for example, to simultaneously search through collections of newspapers, photographs, plays, letters, and novels. This should increase serendipitous discoveries and encourage us to think about our research in more intertextual and transnational ways. 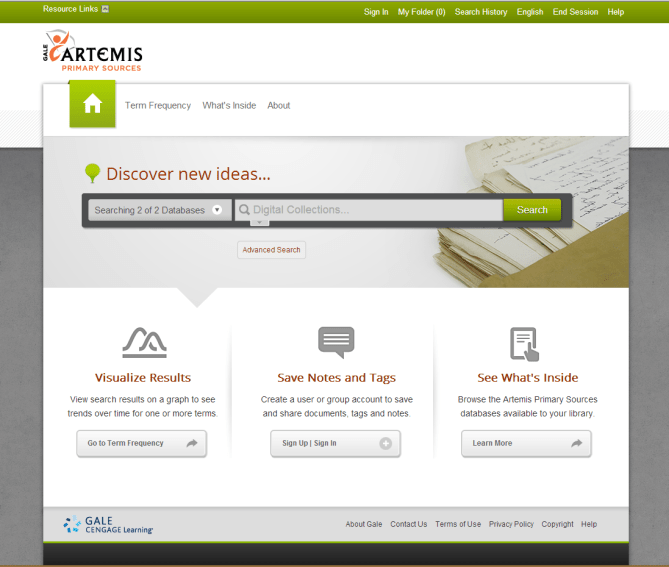 So, what’s it like? This morning I’ve been playing around with the trial version. It’s early days at the moment – at present the archive only contains material from ECCO and NCCO, which rather limits the possibilities of the cross-searching features. Still, it’s possible to get a sense of how things will work. The search features have the same power and flexibility as all Gale products. The results page also has plenty of options for filtering content, so it’s easy to home in on relevant material. Results are separated out and organised by genre – monographs are in one section, manuscripts in another, newspaper in the next, etc. This makes it easier to make sense of the results, but it also defeats one of the objects of cross-searching. I’d like the option to display all results simultaneously and sort them by date, but sadly this doesn’t seem to be available. 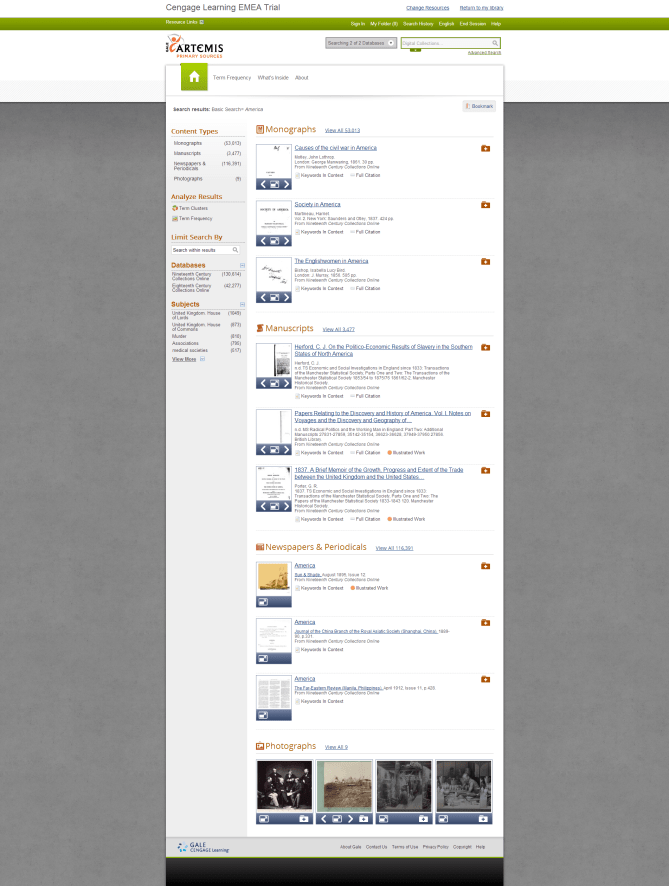 The document-viewing interface is much the same as the one used in NCCO. It’s flash-based, which has both strengths and weaknesses. As I’ve said before, I favour a simpler interface that loads quickly, expands across my monitor, and allows me to save items as images rather than pdfs. Gale’s new Daily Mail Historical Archive has found the perfect solution to this problem, so I hope Artemis might soon follow suit. 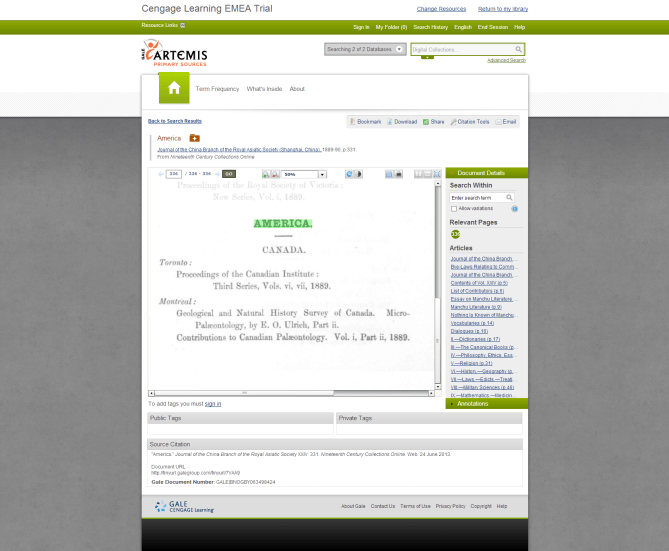 Whilst the ability to cross-search multiple archives is handy, the most exciting thing about Artemis is arguably its new analytical tools. It allows users to display results in two new ways: terms clusters and term frequencies. I discussed these tools last year in my review of NCCO and, for the most part, they remain unchanged. Term Clusters remain an interesting (if slightly confusing) way of identifying linguistic patterns  and connections. The example below highlights phrases that occur frequently within the first 100 words of the first 100 items found when using the search term ‘America’. The ‘first hundred’ restriction slightly limits the potential of the tool, but it remains a useful form of distant reading the archive. 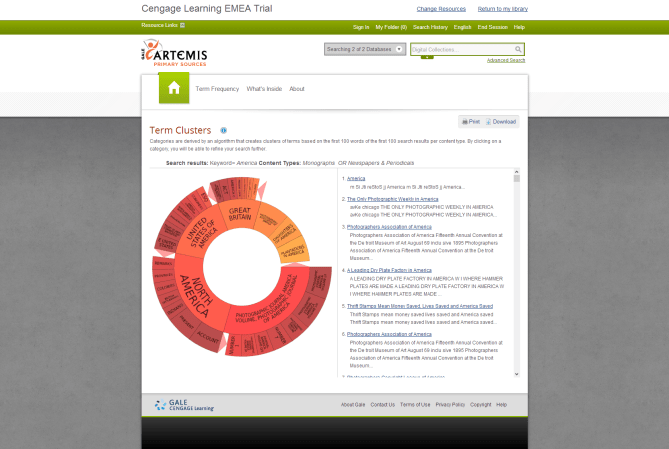 The Term Frequency tool allows users to display search results on a line graph and track how the frequency of a particular term changes over time. When I reviewed this tool last year I was a bit critical of its limitations. Back then, it failed to take into account the fluctuating volume of content in the archive and was therefore useless for measuring cultural change. Fortunately, Gale have integrated a promising new feature that operates in much the same way as Google’s ngram viewer. The search below measures the changing percentage of documents in the archive that mention the term ‘America’. This tool should prove very useful, though the rather eclectic nature of NCCO makes this kind of long-term content analysis methodologically tricky. At the moment, if one document is included for the year 1800 and it mentions the required search term the graph will read 100%.  This kind of tool would be far more powerful if it could be applied to one of the company’s large-scale newspaper databases – something to look forward to if/when these materials are integrated into Artemis. 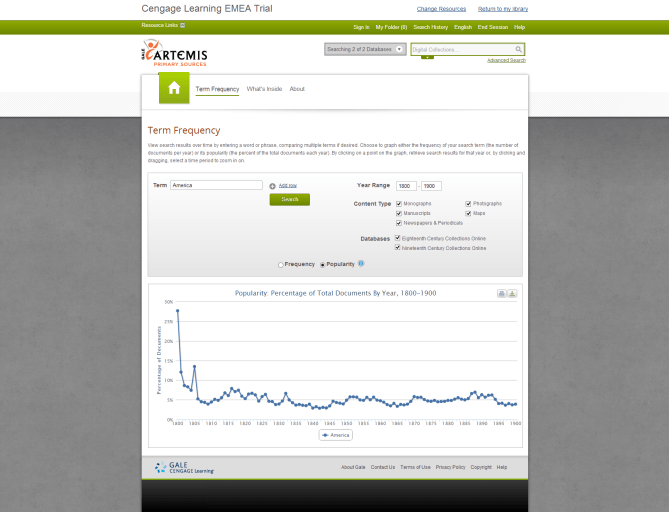 It’s too early to offer any definitive conclusions on Artemis yet. I’ll need to spend a lot more time playing with the new search tools in order to figure out their abilities and limitations. The usefulness of the platform should also increase as more content (particularly newspapers) is added to it in the coming years. Still, I like what I see. Integrating all of the company’s archives onto a single research platform should lead researchers to hunt down new discoveries in unexpected places. Moreover, the development of new analytical tools need not stop with the two already in place – it’ll be interesting to see what new features might be added in the future as the digital humanities movement gathers strength. All in all, Artemis has the potential to be a tremendously useful resource – it’s not quite there yet, but it’s certainly one to keep an eye on.

Artemis is currently running as an open trial until June 30. Try it out here!