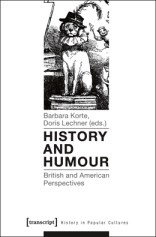 A copy of History and Humour: British and American Perspectives has just landed in my pigeon hole. It’s a new book packed with interesting essays exploring the relationship between history and humour, plus an article by me to make up the numbers. My piece compares Twain’s Connecticut Yankee with Wilde’s Canterville Ghost and throws in a few newspaper jokes for good measure. Here’s how the editors’ introduction describes it:

BOB NICHOLSON, in a transatlantic comparison of late-Victorian usage of history in newspaper joke columns and comic novels, observes a struggle on the part of Britain to come to terms with America’s increasing economic and cultural superiority. Thus, joke writers and literary humorists tended to “juxtapose images of the American future with those of an idealised British past” and emphasised the “centrality of history to British national identity at a time when the country’s future was beginning to look increasingly uncertain.” This uncertainty may also be observed in the fact that British humorists turned to the past in the attempt to reaffirm British superiority, yet the popular reception of transatlantic humour at the same time indicates an acceptance of modern American culture in Britain.

I couldn’t (and, in fact, didn’t) put it better myself!